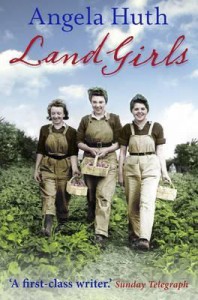 I studied WWII at school; not just from the point of view of the politicians and the armed forces, but also from those who were part of the 'home front'. Ordinary people who joined the Home Guard, the Auxilliary Units, and the Women's Land Army.

The WLA was formed during WWI and relaunched in 1939. Women were recruited onto farms to replace the agricultural workers who were fighting in Europe. Not all the women came from the countryside. Some were from London or the industrial north. Huth's novel is not only a history lesson but also a tribute to these 'land girls' who for years didn't get the recognition they deserved.

It took until December 2007, for the Department for Environment, Food and Rural Affairs (DEFRA) to announce that the efforts of the Women's Land Army and the Women's Timber Corps would be formally recognised with the presentation of a specially designed commemorative badge to the surviving members. The badge of honour was awarded in July 2008 to over 45,000 former Land Girls.