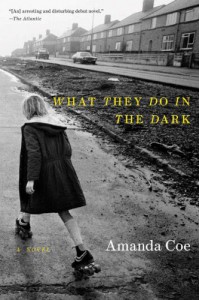 DAY 29 - A BOOK EVERYONE HATED BUT YOU LIKED

This is one of the darkest, most disturbing books I've ever read.  It has echoes of Lord of the Flies, A Clockwork Orange, and We Need to Talk About Kevin, which should be enough to tell you it's not an easy read.

It was the cover I noticed first. The picture looked just like the streets I knew from my childhood, which was confirmed when I read the blurb, as the story is about two girls growing up in a Yorkshire town in the 1970s.

And when I read it, I was immediately transported back there with them. Though thankfully my childhood was a hell of a lot happier than Gemma's or Pauline's.

The ending is shocking, and there are a few plot lines which seem to be left hanging, but this was still one of the best books I've read in a long time.  So when I went onto Amazon to see what other people thought about it, I was amazed to see so many one-star reviews.

Some of the negative comments I could agree with. The American character is a bit of a caricature, and the movie-making plot device is a bit weak.

But bitching about the British vernacular is just silly. Hello? It's set in Yorkshire, so they're not going to talk like native New Yorkers are they, you numpties?

And complaining about everything not being fully explained is frankly ridiculous. Use your imagination for heaven's sake. Coe deliberately leaves things slightly murky, or just out of frame, trusting her readers' intelligence to fill in the gaps for themselves. If she spelled everything out, the book would lose a lot of its impact.

This isn't the kind of book where everything is neatly tied up with a pretty bow at the end. You are left wondering at the fate of some of the characters. And the book is better for this. After all, real life doesn't work like that does it?

I thought What They Do In the Dark was an incredibly powerful and thought-provoking read. I just wish more people agreed with me.