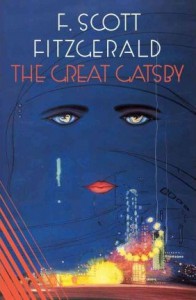 Oh boy.  This was such a difficult decision. I'm a great re-reader, and could easily have done the entire challenge just on re-reads.

But the Brontes, Thomas Hardy, Charles Dickens, and an assortment of children's literature will (spoiler alert) probably turn up later in the challenge, so I'm going with an American classic - The Great Gatsby.

But why do I keep returning to this book? It's not as if any of the characters are particularly likable.  In fact they're all pretty detestable.  Which is why I find them so fascinating.  They are rich, shallow and reckless; a fatal combination.

Or as Fitzgerald puts it, "They were careless people, Tom and Daisy—they smashed up things and creatures and then retreated back into their money or their vast carelessness, or whatever it was that kept them together, and let other people clean up the mess they had made.”

I love Fitzgerald's writing. He describes beautifully the decadent lifestyle of Gatsby and his friends, and shows that the American Dream could also be a nightmare.