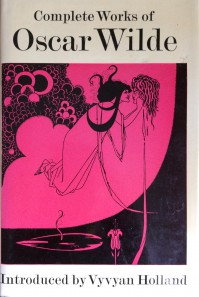 No I didn't read the complete works of Oscar Wilde last night. Just The Canterville Ghost.

I think this was probably one of the first Oscar Wilde stories I ever read (along with The Happy Prince and Other Tales). And I enjoy it every time I re-read it.

I love the Otis family who are completely OK with buying a country house with a resident ghost, and who instead of being terrified by his clanking chains, offer him some lubricator to oil them. Because they're American and pragmatic and don't hold with that kind of nonsense.

Which is a shame, because Sir Simon (the ghost) takes his ghostly duties very seriously indeed and has a whole repertoire of scary characters which have worked very well for him in the past. Unfortunately he is no match for the Otis's twin boys who spend their time thinking up ways to trick him, including a 'ghost' made out of a bedsheet which scares the crap out of him. I reckon Kevin in Home Alone probably got most of his ideas from the Otis boys.

Funny, sad, and ultimately a happy ending. What more can you ask for?