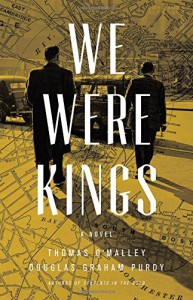 Two crew members dressed in oilskins and carrying guns, brought the man out onto the deck. He was similarly dressed but a smear of blood glistened on his face and his legs were bowed as if from a length of time kneeling. His hands were bound behind his back and he was gagged with a kerchief soaked with paraffin oil. His eyes were wide in his bloodied face as he struggled against his holders. Pushing and pulling, they walked him to the stern, turned him so that he was facing south against the railings, the way they'd come, pressing into the morning tide.

Beneath the boat's props the sea churned blackly. He had a moment to consider this and the intermittent, sweeping light cast by the lighthouse on Minot's Ledge and the clanging buoy of the eastern marker as they entered the waters of the bay, and he suddenly, urgently spoke aloud the Act of Contrition....

And that's where I got jolted right out of the story. In the previous paragraph, he was gagged. So how come he's suddenly able to speak?

What's funny is that there is one of those phantom margin-scribblers at large in this book, but they missed this one.