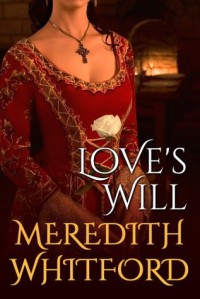 Other than his amazing body of work, we actually know very little about William Shakespeare’s life. Heck, we don’t even know for certain that he was born on April 23rd.

But while this is frustrating for historians, it is a goldmine for writers. They can take the scant facts we know and weave a story around them. Isaac Asimov, Jasper Fforde, and Anthony Burgess have all written about the man, and he also appears on the screen in episodes of Doctor Who, The Twilight Zone, and Blackadder as well as the film Shakespeare in Love.

So is Love’s Will a good addition to the canon? I think on the whole, yes it is. It’s not earth-shattering literature, but it's an entertaining tale which does a good job of filling in the gaps in our knowledge and fleshing out his family. I like how Anne Hathaway is portrayed, and how she reconciles Will’s relationships with Henry Wriothsley and the ‘Dark Lady’ of the sonnets.

There were a few little anachronisms – for instance, Anne mentions having to pay ‘chimney tax’. I’m fairly certain this wasn’t introduced until the late 1600s.

But these didn't stop me from enjoying the story and I loved revisiting my old stamping grounds (I used to live just outside Stratford). And I would definitely say if you fancy a fun read, then you could do a lot worse than pick this book up.